If you’ve been following my Instagram, you’ll know how insanely obsessed with the classic favorite Everything Bagel [ahhhhh *angels sing*] that I currently am. Something about that garlic, onion, poppy, sesame, salt blend that just hits the spot.

I decided to bump things up a bit and see what else would taste amazing with this magical blend on top–  Everything Bagel Focaccia Bread was the result. And it. was. perfect. 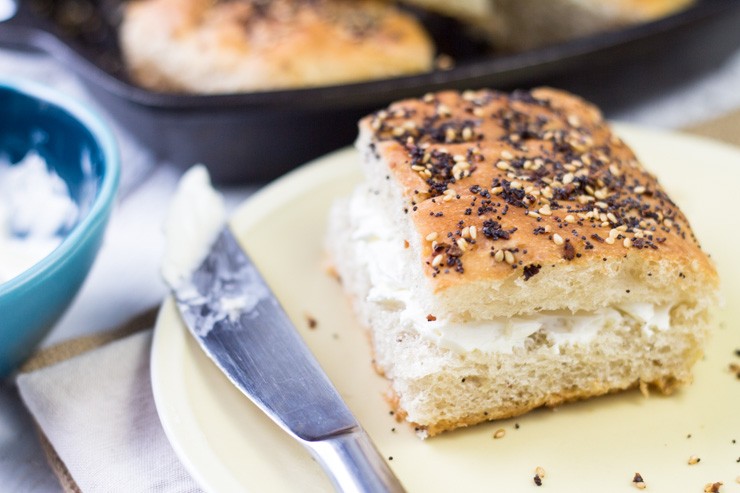 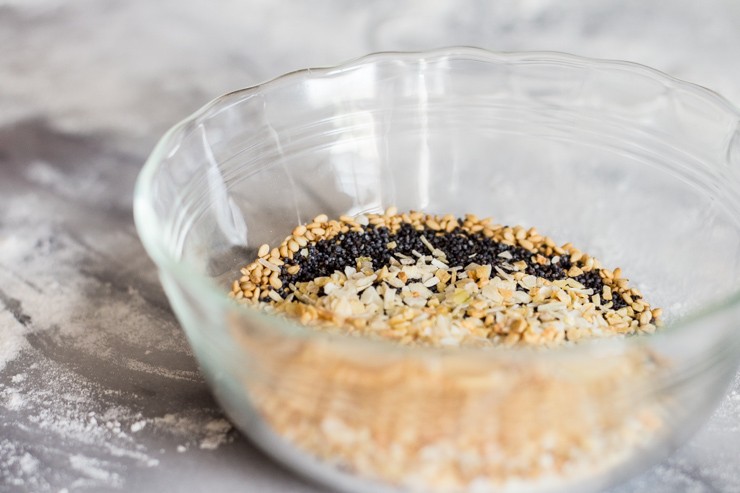 I really struggled with what exactly I would do for this topping mix. As many bakeries do, I considered blending my own unique “everything” mix together to make the post that much more unique. I threw in some common spice cabinet additions– celery seed, various salts, and even some odd additions. All of the varieties were just fine. 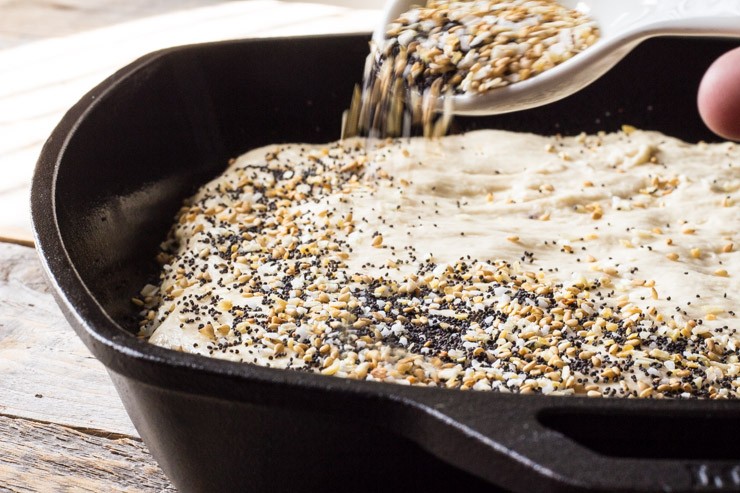 Focaccia is one of those recipes that I have taken for granted. It’s something I’ve eaten plenty of, made a few plain ones in the past, but haven’t really experimented with in the kitchen (until now). I guess I got distracted by all of the sugar and butter… Imagine that. 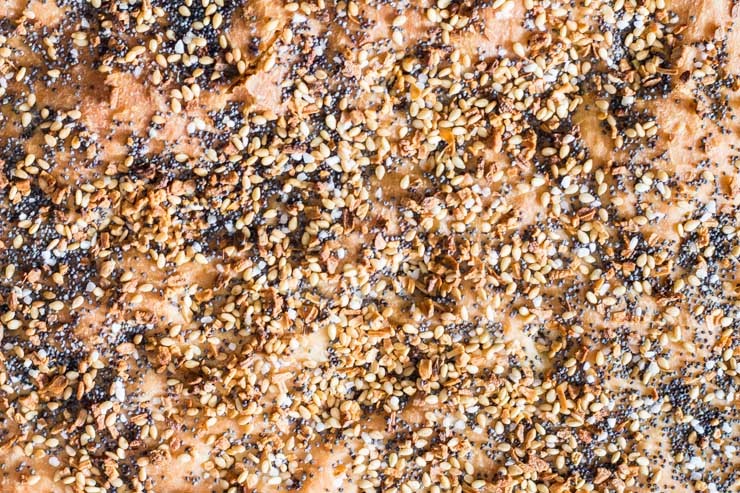 If you look closely enough, you’ll find Waldo in there. Waldo eating every single bit of the perfectly blended garlic, onion, poppy, sesame and salt, I mean. 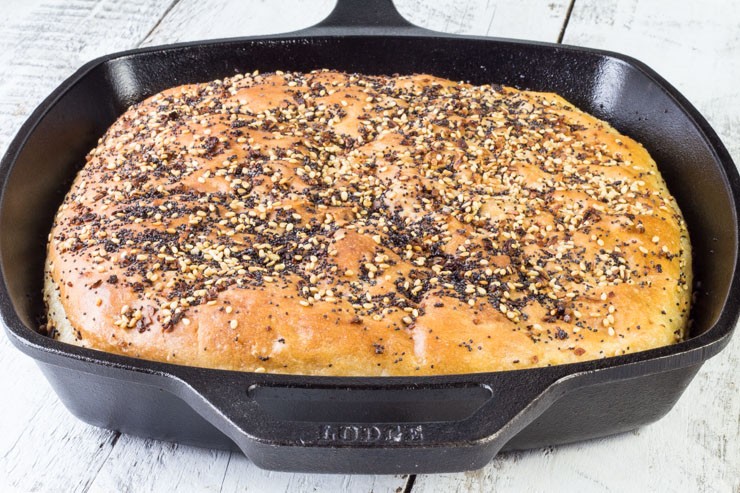 Look at that. Puffy like a classy pillow, tan like a retired Floridian snowbird, heavily coated with seasoning. This focaccia knows what it’s got going on. I would say that it would make for the absolute best office take-in treat evahhh, except you aren’t going to want to share this with anyone. Close the windows. Don’t let the neighbors smell this one at all. They probably didn’t cut their grass on time anyway. They don’t deserve it. It’s juuuust fine. 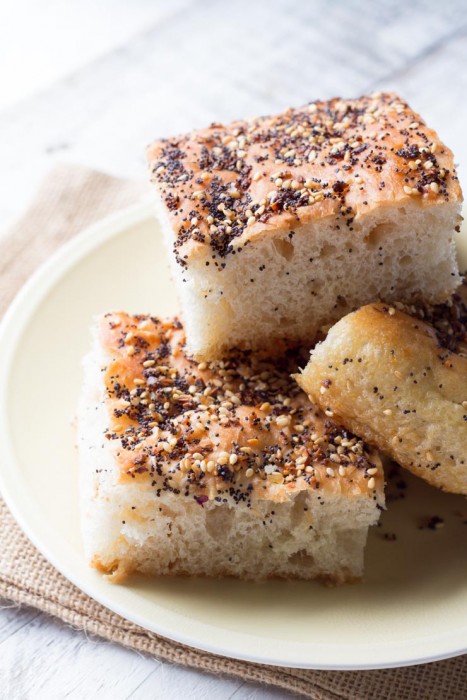 Those tiny little pockets! This super-light bread base is just the perfect canvas for everything. Everything! (get it? good.)

I baked this in a cast iron grill skillet. It gave the focaccia that much more texture by leaving it with nice ridges on the bottom side. Plus, the pan was $20. Seriously. Getchya one. Y’all know my feelings on cast iron. 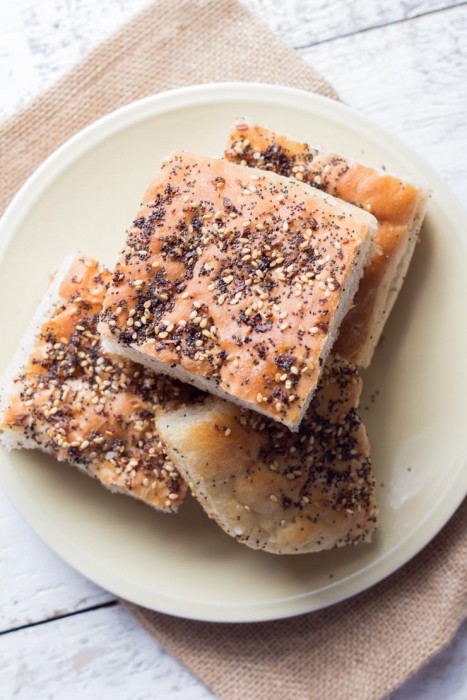 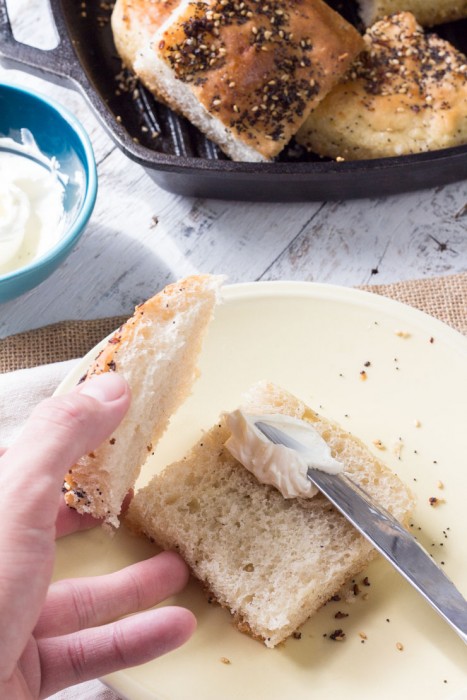 Now… I have to confess that I literally ate 2 pieces of this stuff straight out of the oven. With my mitts still on because it was too hot to handle otherwise. I couldn’t help it. At that point, my house smelled like a busy bakery and I just had a natural instinct to call dibs on whatever I could get my hands on before it ran out. Once I realized that my doors were indeed locked and nobody was in a line behind me waiting (yet), I slowed my roll a bit and went for the obvious– cream cheese (basically a food group in my place).

Just FYI… This was absolutely the best choice. Warm, light focaccia with the whipped cream cheese. It’s like everything that you ever wanted in an everything bagel-esque everything foccaccia. A nice variation from the norm (although, I promise to never abandon the classic favorite bagel), this insanely easy bread is sure to rise to the top of your go-to bakes list.

Favorite bagel? Let us know below!